Hezarfen Ahmet Çelebi is a Turkish scholar who flies for the first time in the world.

“First, he practiced by flying over the pulpit of Okmeydanı eight or nine times with eagle wings, using the force of the wind. Then, as Sultan Murad Han (Murad IV) was watching from the Sinan Paşa mansion at Sarayburnu, he flew from the very top of the Galata Tower (in contemporary Karaköy) and landed in the Doğancılar Square in Üsküdar, with the help of the southwest wind.

Then Murad Han granted him a sack of golden coins and said: ‘This is a scary man. He is capable of doing anything he wishes. It is not right to keep such people’ and thus sent him to Algeria on exile. He died there.” said Evliya Çelebi, who is the most famous Turkish voyager in the world.

Are you ready to become a partner of Hezarfen Ahmet Çelebi for his adventures and help him fly as far as you can?

Available on:
You can download from Google Play Store or Apple AppStore. 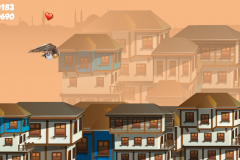 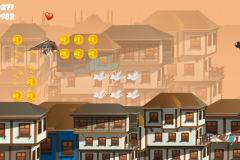